(This is one article in a series written by different authors about BarCamp Nashville 2011. See the previous article in the series at http://flybluekite.com/2011/09/30/six-reasons-business-leaders-should-attend-barcamp/ and see the next article at http://kennysilva.net/)
FOO. BAR. CAMP.

Before travel to a country, it is important to study the culture and understand the history, to learn key elements of the language and etiquette - all to enrich the experience of and potential for enjoyment of the country. So here's some advice for those travelers who will stamp their BarCamp Nashville passport Saturday, October 15, 2011 at the Cadillac Ranch (http://BarcampNashville.org) 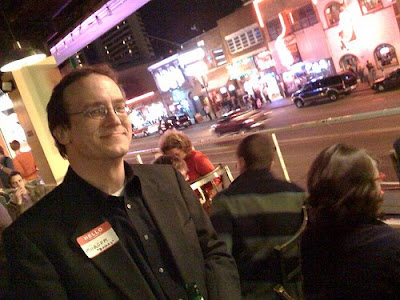 Nicholas Holland (http://www.linkedin.com/in/nashvilleholland) got me thinking about the origins of the name "BarCamp" when he was crowdsourcing event planning with a question on Facebook (or was it Google+) about what his company, Centresource (http://Centresource.com), should do at the event, in addition to sponsoring BarCamp Nashville 2011. He mentioned putting up a tent inspired by the "camp" part of the title and so I wondered...
RAREFIED ATMOSPHERE

The origin of the event is disputable, but the atmosphere is undeniable: it has been the same at science fiction "conventions" since the 1930's; was the same at computer science association meetings in the 1970's; was the same at hacker's meetings in the 1990's; was the same at every "unconference" (with titles like Barcamp, Podcamp, Geekcamp, Wordcamp, Mindcamp, Cloudcamp, Crisiscamp, HealthCamp, RECamp, Givecamp etc.) based (more or less) on "Open Space Technology: A User's Guide," by Harrison Owen. (http://www.amazon.com/Open-Space-Technology-Users-Guide/dp/1576754766/ref=sr_1_1)
In 1985, Owen conducted the first "Open Space" meeting: "In his main meeting room he set the chairs in one large circle and proceeded to explain that what participants could see in the room was the extent of his organizing work. If they had an issue or opportunity that they felt passionate about and wanted to discuss with other participants, they should come to the center of the circle, get a marker and paper, write their issue and their name, read that out, and post it on the wall. It took about 90 minutes for the 100+ people to organize a 3-day agenda of conference sessions, each one titled, hosted, and scheduled by somebody in the group." Read more at http://www.openspaceworldmap.org
The first actual "Barcamp" in 2005 in Palo Alto was an alternative event, planned in response to "Foocamp." And Foocamp was the brainchild of Tim O'Reilly, an affable guy originally from Ireland, raised in California, educated at Harvard, who found fortune and fame publishing computer user manuals but prefers to think of his work as "technology transfer," and is on the board of directors of Code for America... Yes, that Tim O'Reilly who put on his annual invitation-only participant-driven conference: "Foo" (for Friends of O'Reilly) camp.
Consider also that "foo" and "bar" are terms historically used as variables, functions, commands and placeholders in programming (that may help explain some of recent the consternation about the amount of technical content - it's never enough for some coders). And contrary to popular belief after the inept operations of some "camps," there is no association with the WWII military acronym "FUBAR." (http://en.wikipedia.org/wiki/Fubar)
I've attended Barcamps in San Francisco and Boston and Detroit and New York and Dallas and San Diego, and while they may be alike in atmosphere, no two have ever been exactly the same, thank goodness. Because I have found that it is exactly the unique qualities of the people attending in each city that make or break the experience. The Barcamps and Podcamps that I have attended in Nashville have also been unique because of the "Southern hospitality" which pervades every aspect of life here. In other cities I've seen Barcamp attendees arm wrestle or throw darts (and even beer bottles) to see who gets to speak next. Not so in Nashville with a far more organized approach that has generally resulted in a better selection of speakers and topics.

WHERE MY HECKLERS AT?
Having made presentations at a number of camps including Barcamps and Podcamps in Nashville, I've noticed that in addition to excellent organization of the events, audiences in Nashville are in general far more respectful of speakers than audiences in other cities. By that I mean there seem to be far fewer hecklers in any given audience. Destructive heckling, or heckling just to heckle, is no better than obnoxious trolling online, but constructive heckling, where the audience is doing its best to not only engage with the topic, but also keep the speaker honest, is the best possible unconference experience for everyone.
So please speak up, Nashvillians! If you are not presenting, at least add what you can to the discussion. Even dumb questions move the presentation along an honest path. Come to Barcamp with an open mind, but don't be afraid to share what you know, and to call people out if they are wrong or misinformed, or worse yet, misinforming others. It's your right and your responsibility.
"Voting with your feet" also counts as productive heckling. Dave Delaney (http://davemadethat.com) has been great about encouraging this for years. And Nashville has been getting much better at it. Presenters should pay close attention to this and switch to Q&A format before the majority of an audience leaves. No question, good Q&A offers the best of both worlds for the audience and speaker (it is often the best part of the presentation).

SURVIVAL SKILLS
A Barcamp is a marathon, definitely. Not so much in time (not a 3-day conference, but it does run morning to night if you stay for the afterparty - highly recommended), but certainly in energy (both physical and mental). Great presentations can leave you exhausted (a good exhausted). One tip, even though the bar is open, it is probably best to wait until "the sun is over the yard-arm" somewhere in the world before sampling the latest micro-brew. Everyone's metabolism is different, but snoring in an afternoon session is never good form, plus falling asleep in a roomful of geeks (with the collective maturity and sense-of-humor of a 14-year-old) is never a good idea (ask anyone who has woken-up to find a new permanent ink handlebar mustache or worse on their face). 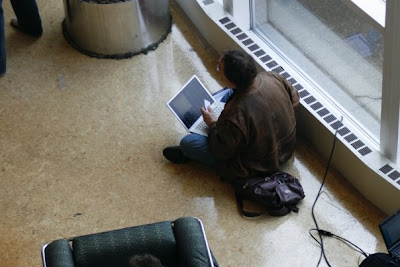 If you are speaking, be early, be prepared, be brief and be seated. I usually just keep repeating the last 2 over and over to myself before and during my presentations. Bring your own extension cords, and never assume there will be adequate technology (bandwidth, projection equipment, audio amplification) because if something can go wrong, it probably will. So be smart and plan on it. Could you do your presentation by candlelight if the power fails? Plan on it.

NOT REAL WITHOUT PICS

If a tree falls in the forest and no one tweets about it, does it make any sound? It might, but if no one tweets or posts or shares about Barcamp, you are missing the point. In addition to constructive heckling, the unconference idea is to share all of the discoveries, new ideas, good jokes and wardrobe malfunctions (oh, I hope not) with the rest of the online community (not just in the Nashville area, but around the world). Unlike traditional conferences where cameras and recording devices are sometimes banned (so you will buy the "official" recordings from conference organizers), someone should be able to follow BarCamp Nashville 2011 by monitoring the #BCN11 stream (http://twitter.com/#!/search/%23bcn11).
Joking with conference organizers one evening, I discovered that every year in the crop of new Barcamp volunteers, someone always suggests videotaping the sessions. It's always a big hoot & holler for conference veterans. Apparently they have tried a number of times, but have always been overwhelmed (complexity of audio in the open bar setting, lighting problems, editing issues, etc.). So unless some really intelligent video production company steps up to the challenge (hint, hint), it is up to attendees to capture and share as much as possible.

SHOWING UP IS 90% OF THE BATTLE

Now that you know something of the history, and some of the current challenges, I would encourage you to attend BarCamp Nashville (and follow these suggestions to get the most out of your experience - be the heckler, share the magic!), and to invite others in the local community to attend, and to invite those outside of the area to tune-in best as possible to monitor the event online. In the case of BarCamp Nashville volunteers, there is 10% inspiration and 90% perspiration, no question that is true. But in the case of attendees, just get your butt in those seats as early as possible (on a Saturday, I know). Show up, and with whatever energy you have left, please participate - loud and often!